Dogs, like most pets, know how to go with the flow. They rarely insist on what they want to do because the one thing that matters most to them is our happiness. They’re willing to set aside their wants to see us smile.

This is the reaction we’re used to, that’s why we always get caught off-guard when dogs insist on what they want. We don’t get it when they show us that they’re capable of being stubborn. We find it adorable, which annoys them even more.

When dogs say no

Georgia, a beautiful Bernese Mountain Dog, is one of the many pooches who showed their humans how stubborn they could be. What caused her to show this behavior? Well, she didn’t want to leave the veterinary clinic.

As it turns out, Georgia loves it when she gets to spend time with her vet, Dr. Kristy Hiltz. It may seem odd for other pet owners, but the clinic is one of her favorite places to visit. She loves it particularly because of all the attention she gets from the doctors and staff working there.

She was having a grand time when her owner, Eric, told her that it was time for them to go home. Her smile instantly disappeared into a frown, and she lay flat on the floor. Her fur dad tried to help her get up, but she refused to budge.

Eric tried a myriad of ways to convince her to exit the clinic. He asked the staff to give her liver treats, but that only worked after a few tries. Her mind changed the moment she realized that they were only bribing her.

When Eric realized that there was no way he could get Georgia to walk out of the clinic, he decided to carry her. Watch him deal with the stubborn pup in the video below: 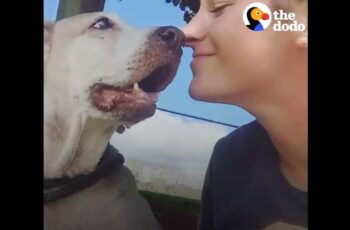 A woman named Jennifer Hoyt and her fiance, Dennis Schaffer, … 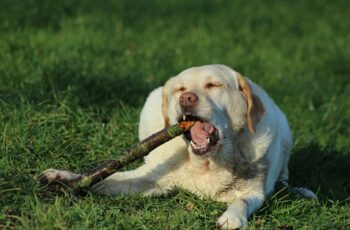 Many of us assume that animals can’t get along with …