Street dogs’ lives are rife with struggles and pains. From their perspective, things may appear hopeless. But every now and then, Good Samaritans come their way and show them that life can be beautiful, too.

A dog named Poppy is, fortunately, one of those dogs who have experienced the kindness of humans.

The said pit bull has recently become viral on TikTok for her reaction after a rescuer collects her and puts her in the car. You may want to prepare your tissues, as this story is quite emotional.

A woman named Jacks Anderson and her kind wife were eating lunch at a fried chicken hut when Poppy came to watch them. The owner of the small restaurant just shooed the pup away.

After their hearty meal, Jacks and her wife saw the pup again on their way home. They noticed that Poppy’s belly was huge – she was pregnant. They knew right then and there that they had to do something.

Jacks and her wife managed to earn Poppy’s trust and ultimately convinced her to be picked up and brought to the car.

When the two women waited for the pit bull to calm down a bit, they noticed that there were tears coming from Poppy’s eyes; she was crying. Jacks said that she hadn’t ever seen that in a pup. She believed that what they did made an impact on the dog.

Jacks and her lovely better half took Poppy to the local veterinarian where she was treated for worms and fleas. Fortunately, the pregnant pit bull was healthy and was immediately released back into Jacks’ care.

Poppy’s real personality starts to shine. She is apparently a dog who acts as a sponge for pets and cuddles. Jacks says that Poppy is the type of pooch who loves to be loved.

♬ Somewhere Over The Rainbow_What A Wonderful World – Israel Kamakawiwo’ole 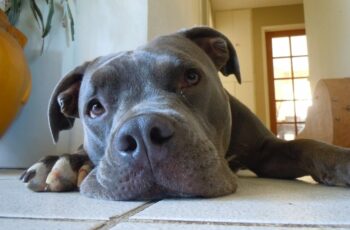 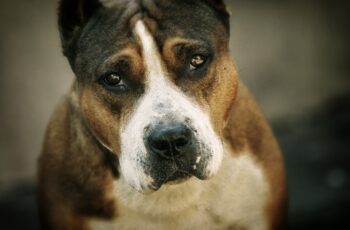