When dogs give birth, most of us expect to see puppies that look like their mothers. There may be some small variations in fur color and facial characteristics, but most of these variations are not that significant.

Rosie, a Golden Retriever mix from a rescue organization, surprised her foster family when she gave birth to puppies who did not resemble her.

Prior to Rosie’s arrival, John and Katie had fostered approximately 20 dogs. The pair had much experience with dog fostering, but Rosie was unique. Rosie was already pregnant when they fostered her. John and Katie decided to foster Rosie and her puppies until they could be adopted.

The couple did not expect anything amiss with Rosie’s puppies, yet they were nonetheless pleasantly startled when Rosie gave birth to her litter. All four of Rosie’s puppies were born with black and white fur, which was very different from Rosie’s appearance.

Katie eventually shared photographs of the puppies with a statement saying that the puppies did not resemble what was expected and that Rosie had given birth to baby cows. Everyone who saw Katie’s post fell in love with every puppy.

John and Katie adored Rosie’s puppies so much that they gave them all cow names. The puppies were named Daisy, Betsy, Clarabelle, and Moo.

Rosie was a fantastic mother to each of her children, despite their appearance being vastly different from her own.

When Rosie and her puppies were finally ready, they were placed up for adoption. They were all soon adopted by extraordinary families who provided them with permanent, loving homes that they all should have. 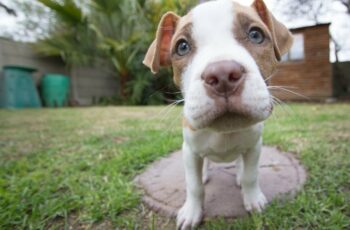 Street dogs’ lives are rife with struggles and pains. From … 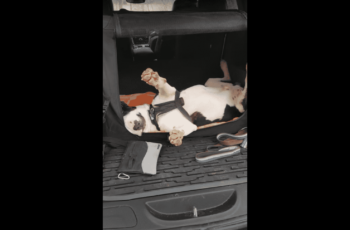 In this story, this Pit Bull named Polly and his …